Jim Henthorne's Vietnam Vet's Page http://www.nexus.net/~911gfx/vietnam.html
Scroll down toward the bottom, you will find a link to Project Map Scan

Cold War Certificate Program https://coldwar.army.mil/
Cold War Recognition Certificates are available to all members of the armed forces and qualified federal government civilian personnel who faithfully and honorably served the United States anytime during the Cold War era, which is defined as Sept. 2, 1945 to Dec. 26, 1991.

National Archives and Records Administration http://www.archives.gov/
The Combat Area Casualties Current File (CACCF) contains records with final data on U.S. military personnel who died as a result of hostilities (killed in action, died from wounds, died while missing, or died while captured) or other causes (died from illness or injury, non-hostile; died from other non-hostile causes; died while missing, non-hostile) in Cambodia, Communist China, Laos, North Vietnam, South Vietnam, or Thailand during the conflict in Southeast Asia. Request copies of your military records on line.

The Legacy Project http://www.warletters.com
Launched on November 11, 1998, the Legacy Project is a national, all-volunteer organization that works to honor and remember those who have served this nation in wartime by seeking out and saving their letters.

http://five-four-fa.fifthinfantrydivision.com/  . This website has been rebuilt by a member of its original web designer team and it serves as a memorial to SGT Tommy Dorris, a FO SGT for 5th BN 4th FA, who was the original site owner.

The Virtual Wall http://www.thevirtualwall.org/
A digital interactive legacy project memorializing the men and women who gave their lives in Viet Nam. 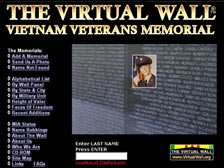 Viet Nam Veterans of America http://www.vva.org/
Founded in 1978, Vietnam Veterans of America, Inc. is the only national Vietnam veterans organization congressionally chartered and exclusively dedicated to Vietnam-era veterans and their families. VVA is organized as a not-for-profit corporation and is tax-exempt under Section 501(c)(19) of the Internal Revenue Service Code.

Veterans of the Vietnam War http://www.vvnw.org/
The VVnW was formed in Pennsylvania in May, 1980 by a small group of veterans to provide information and services not easily obtained elsewhere. The goal was to serve Veterans of not only the Vietnam Era, but anyone who served in the Armed Forces of the U.S. at any time; in the Armed Forces of Allied countries during the Vietnam era; civilians who served in Vietnam in support of the U.S. forces; and concerned citizens in support of all veterans.

Disabled American Veterans http://www.dav.org/
Formed in 1920 and chartered by Congress in 1932, the million-member DAV is the official voice of America's service-connected disabled veterans -- a strong, insistent voice that represents all of America's 2.1 million disabled veterans, their families and survivors. Its nationwide network of services -- free of charge to all veterans and members of their families -- is totally supported by membership dues and contributions from the American public. Not a government agency, the DAV's national organization receives no government funds.

Find someone's bio at the Virtual Wall by name & state. Some have photos! http://www.virtualwall.org/iStates.htm

Medline Plus: Veteran's Health http://www.nlm.nih.gov/medlineplus/veteranshealth.html
National Library of Medicine Portal on topics of health interest to all Veterans, including up to date news on clinical trials, research and directory searches.

The Gateway to veterans health and wellness: www.myhealthyvet.va.gov For those that qualify, you can order medications on-line.

When is a Post Traumatic Stress Disorder Claim Legitimate...and When Is It Not
http://expertpages.com/news/ptsd.htm
Expanded version of an article first published in the November 1995 issue of For the Defense, the monthly journal of the Defense Research Institute, Chicago, Illinois.

F.Y.I.: This information may or may not be of immediate interest. However, it is one of those things where sometimes it is better to have too much information than too little. There may be those who might find the below information beneficial.

Below are web-sites that provide information on Veterans benefits and how to file/ask for them. Accordingly, there are many sites that explain how to obtain books,  military/medical records, information and how to appeal a denied claim with the VA. Please pass this information on to every Veteran you know. Nearly 100% of this information is free and available for all veterans, the only catch is: you have to ask for it, because they won't tell you about a specific benefit unless you ask for it. You need to know what questions to ask so the right doors open for you -- and then be ready to have an advocate who is willing to work with and for you, stay in the process, and press for your rights and your best interests.

Trooper Jim Good gave this link to us on the commo net. You could spend the rest of your life clicking on the hundreds of links.